per person, double occupancy, $655 single supplement
Depart the US
Day 1
Arrival – Reykjavík
Arrival at Keflavík airport. We meet up with our driver/guide for the tour at the International airport in Keflavík. From there we take a 50 minute ride to the vibrant and beautiful city of Reykjavík. In Reykjavík we have a free day of exploring the city. Guided walks can be arranged for those who are interested. In the afternoon we have a welcoming party with appetizers and drinks. Overnight in Reykjavík.
Day 2
RUV taping and cooking class
This morning we hope to have a taping at RUV (Iceland’s public radio headquarters) for a taping. Relevant speakers are interviewed live by Heather Goldstone of WCAI and played later on the radio back in the US. In the afternoon we participate in a cooking class where we learn about traditional Icelandic cooking and make our own meal.
Overnight in Reykjavík.
Day 3
The famous Golden Circle with local visits

Our first stop of the day is at Þingvellir National Parliament Park, a site of great importance to Icelanders, as it is here that the country‘s first democratic parliament was founded over a thousand years ago. It the oldest parliament in the world. It is also the place where the tectonic plates of Europe and America are causing the landscape to be torn with deep crevasses and canyons. It is surrounded by lava that burst forward when the crust gave way to the power that moves underneath. The next stop of the day is at Kerið Crater before moving on to Sólheimar eco village where we get a guided tour around the village and get to know its history and purpose. Solheimar is a world- renowned sustainable community known for its artistic and ecological atmosphere where about 100 people live and work together. It was founded in 1930 by Sesselja Hreindís Sigmundsdóttir (1902-1974). It is a small village set out in the countryside, characterized by vegetation, open common spaces and buildings that nicely co-exist with the landscape. From here we go to the Friðheimar greenhouse which uses geothermal heating, and have a guided tour by the owners. The greenhouse is run by a husband (an agronomist), wife (a horticulturist) and their 5 young children. We get to taste their world-famous tomato soup, which is made from their own produce. They also run a stable where you can get up close and personal with the sturdy Icelandic horse.

After, we head to the Haukadalur valley, filled with sagas and history, but also the home of the geysers. The king is the massive hot spring Great Geysir, and then there is the crown prince, Strokkur. Strokkur erupts every five to ten minutes and reaches a height of 30 m (98 ft), though it has been known to hurl water up to 60 m (196 ft) up! We then proceed to the powerful waterfall Gullfoss. Known as the Golden Waterfall, this well over 30 m (96 ft) high, two-tiered waterfall hurls glacial water from the river Hvítá with such extreme power that those standing too close are drenched with the water as droplets fly back up and over the rocks on the edge. Overnight in Flúðir area.

Day 4
Landmannalaugar highlands area
Landmannalaugar is our destination for the day, is an area of recent volcanic activity, and has colorful rhyolite mountains, rugged lava fields, hot springs, and a natural warm pool for relaxation. This pearl of the interior is situated in a valley between colorful mountains at the dark edge of the rhyolite lava field, Laugahraun. Many hot and cold springs create a bathing warm brook, where people bathe. The surroundings of Landmannalaugar are too colorful and magnificent to describe in words. Along the way to Landmannalaugar, we visit some stunning spots such as Háifoss waterfall, Gjáin oasis, and the commonwealth farm (Þjóðveldisbærinn). The Commonwealth farm is based on the ruins of the former manor farm, Stöng in Þjórsárdalur which is considered to have been abandoned after its destruction in the Hekla eruption of the 1104. We have the opportunity to see for ourselves the buildings the Icelanders’ ancestors lived in and learn about their daily life. Overnight in Flúðir.
Day 5
Lava center and Westman Islands
Today, we take in the interactive exhibition of the Lava Center Museum, where visitors learn about the volcanic and tectonic forces which created and continue to shape Iceland. There is also a 360° viewing platform to see two of the large volcanoes, Hekla and Katla. We then take the ferry from Landeyjarhöfn to a cluster of small islands just off the shore of Iceland, called the Westman Islands, in Icelandic known as Vestmannaeyjar. There are 14 islands, the largest, Heimaey, has a population of over 4,000. The other islands are uninhabited except for a few cabins used during hunting season. Fishing and bird hunting are the main source of sustainability. There are some cows and sheep on the island, but farming is more of a hobby now. In January of 1973, the volcano in the island called Eldfell (meaning Hill of Fire), erupted covering 400 homes when the island evacuated. Nearly one-third of all the homes and buildings had burned or been covered under the lava and ash. After the eruption, the landscape was drastically changed. Lava covered the oldest part of the town and the size of the island had increased by more than three-quarters of a mile. For several years, heat from the lava was harnessed and used to heat the homes in the town, which led to an eventual unified system of heating on the island. We have a tour of the island and a visit of the Eldheimar Museum. If time and weather allows, we can add a short sailing experience around the islands where we get a great view of the surrounding islands along with their wildlife. Overnight in Vestmannaeyjar.
Day 6
The south coast
Our day begins with a Ferry ride back to the mainland. Once on the mainland, we stop at 2 of the most iconic waterfalls in Iceland, Seljalandsfoss and Skogafoss along with a hidden gem. At Skógar, we visit the Skógar museum, a cultural heritage collection of 15,000 regional folk craft artifacts exhibited in 3 museums and 6 historical buildings. Skógar Museum opened on December 1st, 1949. Next up is Dyrhólaey promontory, before we then move onto Reynisfjara, the black sand beach with basalt rock formations. We can also see the trolls in the sea. According to local Icelandic folklore, these large basalt columns were once trolls engaged in trying to pull ships from the ocean. However, as bad luck would have it, the dawn quickly arose, turning the trolls into solid stone. In Vík, where we are staying for the night, we visit one of the oldest wool production companies in Iceland and have a guided tour around the factory floor. Overnight in Vík area.
Day 7
Skaftafell area and Jökulsárlón glacier lagoon
Today, we enter the realm of the largest glacier in Europe, Vatnajökull. The area around the glacier is simply stunning and has been made a part of the second largest national park in Europe, Vatnajökulsþjóðgarður or Vatnajökull national park. Along the way we visit places such as the famous Fjaðrárgljúfur canyon. Near Vatnajökull, we find the Jökulsárlón glacier lagoon, where we witness the effects of global warming firsthand as we see the icebergs that break away from Breiðamerkurjökull glacier and float towards the open sea. The glacier used to fill up the entire area but has retreated inland with great pace in recent years. We take a tour in an amphibian boat around the icebergs on the lagoon to get as close as possible. Overnight in Vík area.
Day 8
Return to Reykjavík, tree planting
Today we return to Reykjavík. On the way we meet up with the team at “Plant a tree in Iceland” and take part in planting trees to carbon offset your travels in Iceland and help fight soil erosion in the area. Here we witness the effects of erosion in Iceland and learn what can be done to help fight it. We then continue to the Icelandic Glacial factory where we have a guided visit around the factory and learn about Icelandic drinking water. Before heading to Reykjavík, we stop at a geothermal power plant with where we are guided around the plant and learn about Iceland’s sustainable energy. Iceland sits over a rift in continental plates. The high concentration of volcanoes in the area provides geothermal energy which generates heat, hot water and electricity for over 87% of Iceland. We finish our day heading back to Reykjavík where we spend our last night in Iceland. Dinner and overnight in Reykjavík.
Day 9
North East Iceland
Transfer from Reykjavik to Keflavik. Depending on the flight departure, there may be time in the morning to see a little more of the city.
What’s included
Price does not include: 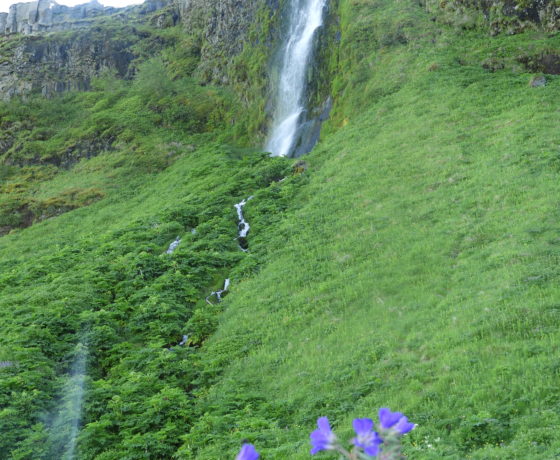 Booking for Nordic Adventure to Iceland